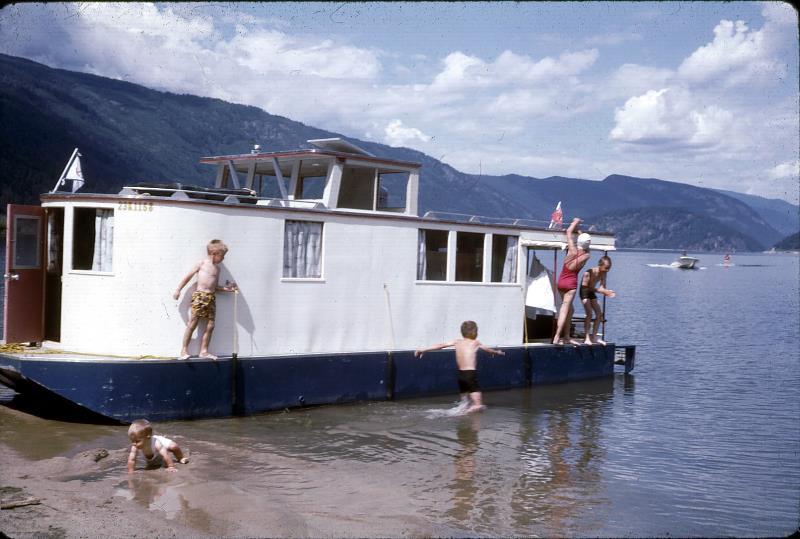 One summer, after reading a brochure on houseboats in the Okanagan, my husband decreed that was to be our holiday for the year. What he failed to realize was that, while the brochure showed adults lounging on the deck and sipping drinks, our passengers would be quite different. They would consist of six children between the ages of 14 months and 11 years. However, being the obliging help-mate that I was, I acquiesced and started packing for six children and myself. (I refused to take the dog). My better half managed to get his own things packed and made it to the station wagon.

Upon arriving in Sicamous, my husband, who I’m sure was never on a boat other than the large ones he was on in the Royal Navy, was given rudimentary instructions on how to handle an unwieldy houseboat. We quickly got everything down to a science. Alan would be up in the wheelhouse, supposedly steering, while our daughter, 11, and eldest son, 9, hung over the stern of the boat to keep the rope that attached the little boat we pulled behind us from becoming entangled in the blades of the twin propellers running our boat. Our 7 year old son sat on the only decent bed the houseboat possessed and held the baby to keep him from being thrown to the floor during our less than perfect departures and landings. Our 3 and 5 year old sons found seats somewhere and held on. My job was to jump off with the rope when we hit shore (literally) and to shove off and then leap (or sprawl) onto the deck before the boat got too far away.

We strapped the children into life jackets and kept a long boat hook on deck with which we could retrieve any child who happened to fall overboard.  Fortunately, there were lots of fruits to be had at every stop, and as children will eat limitless amounts of peanut butter, I didn’t spend too much time concocting things. Our supply of cutlery and miscellaneous items dwindled until we realized the youngest was dropping things overboard so he could watch them sink.

The first night we decided to run the boat up on the shore and sleep there. However, a storm came up in the night and waves were washing over the stern where our daughter and eldest son were sleeping. As both they and their bedding were getting wet, Alan crawled up to the wheelhouse and I pushed off from shore in bare feet and nightgown and once again lunged for the departing deck. We moved to a quiet tributary and dropped anchor and went back to sleep. We were awakened in the morning by a large branch poking through the open wheelhouse window. Our anchor had dragged, and so we spent our following nights tied up at the nearest marina.

The sleeping arrangements were such that I don’t know where all those drink-sipping adults would have bunked down. The only real bed on the boat was occupied by our 7 year old son, who had asthma and had to be kept warm and by the baby, who also had to have something he was not going to fall off of. The rest of the sleeping accommodations consisted of thin boards placed strategically around the sides of the boat. My husband and I shared a narrow board in the eating area. If one of us moved in the night, the other one had to also. I took the side nearest the wall since the person sleeping on the outside was apt to get tossed to the floor. After all, this nightmare was my husband’s idea, and I felt that it was only fair that he should be the one to suffer that fate.

The daytimes were fairly pleasant as we boated down the lakes but evenings left much to be desired. I would take the six children into whatever little town we had docked at for ice cream and to look around. When we arrived back at the boat, Alan would wander into town to the nearest Legion. (And every town seemed to have one). Since we were in the mountains our radio reception was nil, and while the boat wasn’t running, the lights were too dim to read by.  On the sixth day I declared mutiny and said I was going home. My husband didn’t offer even token resistance. I think all that “togetherness” had reached saturation point.

The following summer, we rented a three bedroom cottage.

Written by Grace W.| Author in Residence at Marrion Village