The Lady Larks in Concert 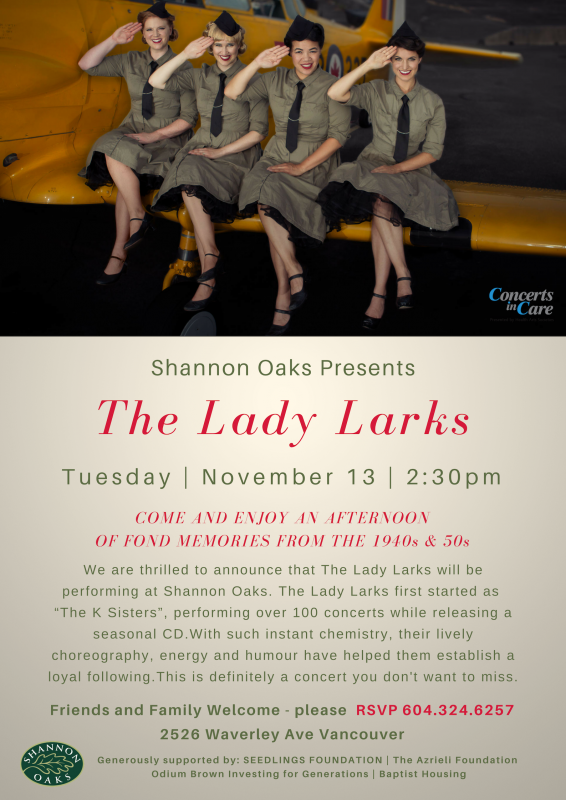 Join us on Tuesday, November 13 at 2.30pm for our Lady Larks Concert!

This free concert is welcome to all and will be held at Shannon Oaks, 2526 Waverley Ave Vancouver.

The Lady Larks first started as “The K Sisters”, performing over 100 concerts while releasing a seasonal CD, “Jingle Jangle” (2010) and another called, “Swinging with The K Sisters” (2011) in tribute to The Andrews Sisters and the music of World War II. With such instant chemistry, their lively choreography, energy and humour have helped them establish a loyal following.  In addition to public performances, they have also performed for hundreds of veterans and their families at various branches of the Royal Canadian Legion in BC and annually at the George Derby Centre for Canadian Veterans of the Armed Forces.  In 2011, they also toured Interior BC and Vancouver Island, including veteran centers and seniors’ facilities in their tour.  Locally, the quartet has performed with the Vancouver Thunderbird Chorus, the Langley Barbershop Society, the Richmond Singers and many other local singing ensembles.  The Lady Larks were featured at the Harmony Arts Festival 2013 in West Vancouver.  In 2014, they were featured in “Until Everyone Comes Home”, a WWII USO style variety show.