Opportunity to Recover at Work 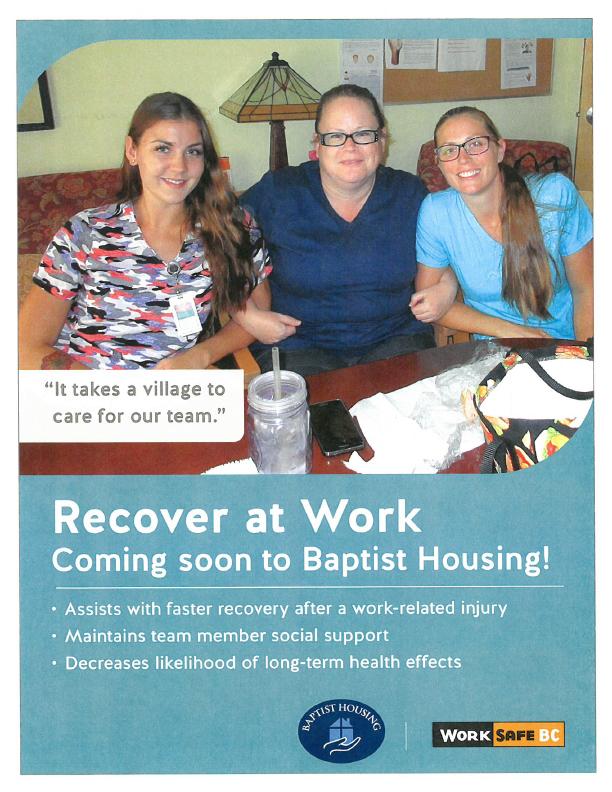 Baptist Housing has 1,200 team members caring for 2,100 residents at 17 senior living communities across BC. Having an effective return to/recover at work program for injured workers is essential; not only for the workers themselves, but also for their co-workers and the organization’s operations.    In Kelowna, the organization has three residences and about 500 team members. They’ve had a return to work program for the past three years, but sought to enhance it earlier this year. The biggest change was introducing the idea of light or modified duties at the time of injury, rather than waiting a couple of days for Human Resources to make those decisions.    “This was a big change for us,” says Adrienne Hodges, director of Human Resources for Baptist Housing, in Kelowna. “Now the first aid attendant, typically an RN, can talk to the worker about appropriate modified work duties at the time of injury.”   Supportive Environment   In the past, injured workers would see a doctor who may not know the environment or what other options might be available. This made it difficult for a doctor to recommend modified duties, so often, workers were instead directed to take time off work. Hodges adds that offering injured workers light or modified duties allows them to stay in the work mindset and be supported by their colleagues, which not only helps support a better recovery, but also has psychological benefit, since they don’t feel isolated at home.   Hodges says there was some education and training needed for the nursing team, so they could feel comfortable identifying what light duties were appropriate. Some general education was developed for the team about the revamped program.   “Overall, the response has been positive. Our nurses thought it might take too long or they wouldn’t have the expertise to determine capabilities, but we involved the whole team in the development of the program,” she says. “Like many organizations, we experience staff shortages, and part of this is because of injury to staff. Having injured staff at work, even though they aren’t capable of performing their normal job means there is no salary disruption for the worker, it reduces the workload for others, and enhances the quality of life for our residents.”    Up to the task   In developing the revised program, Hodges and the Baptist Housing team created “job jars” and broke down every role into small tasks. They then asked their team to identify the tasks they’d like to do if they had the time. Next, they determined what tasks could be done appropriately given a particular injury. A binder was created that is divided by injury and lists the appropriate light duties and restrictions.   “We will have to wait to do more in-depth analysis, but we feel that our claims have been reduced, and we are not losing our staff for as long,” says Hodges. “It was a big project, but a very positive experience. I would definitely recommend this approach to others if they find they are always short-staffed because of injuries.”   Generally, Baptist Housing’s program applies to soft tissue injuries, but Hodges adds that even those who have restricted mobility in a limb can still be at work. “They can still contribute,” says Hodges. “When someone is off work their expertise and skill set is lost, but by having them at work, they provide the expertise even if they aren’t providing care directly. And if they can only provide companionship to our residents, there is huge value in that.”   While this enhanced return to work program was piloted at Baptist Housing in Kelowna, it will soon be rolled out at its Victoria care residence.